Asmita, from the Advisor’s Circle, has returned to discuss how she adjusted the Enmore Top for her shape and comfort. She tackled a new fit challenge and ended up with a fantastic new make!

When Liesl released new patterns for spring/summer 2022, I was initially unsure whether I would make the Enmore top+dress. The shelf bra felt too daunting, and the strappy style did not offer enough coverage. However, I wanted to make this for myself as a challenge –both to wear it and overcome my fear of the shelf bra. The result has been nothing less than fantastic, and I am delighted with my new make. 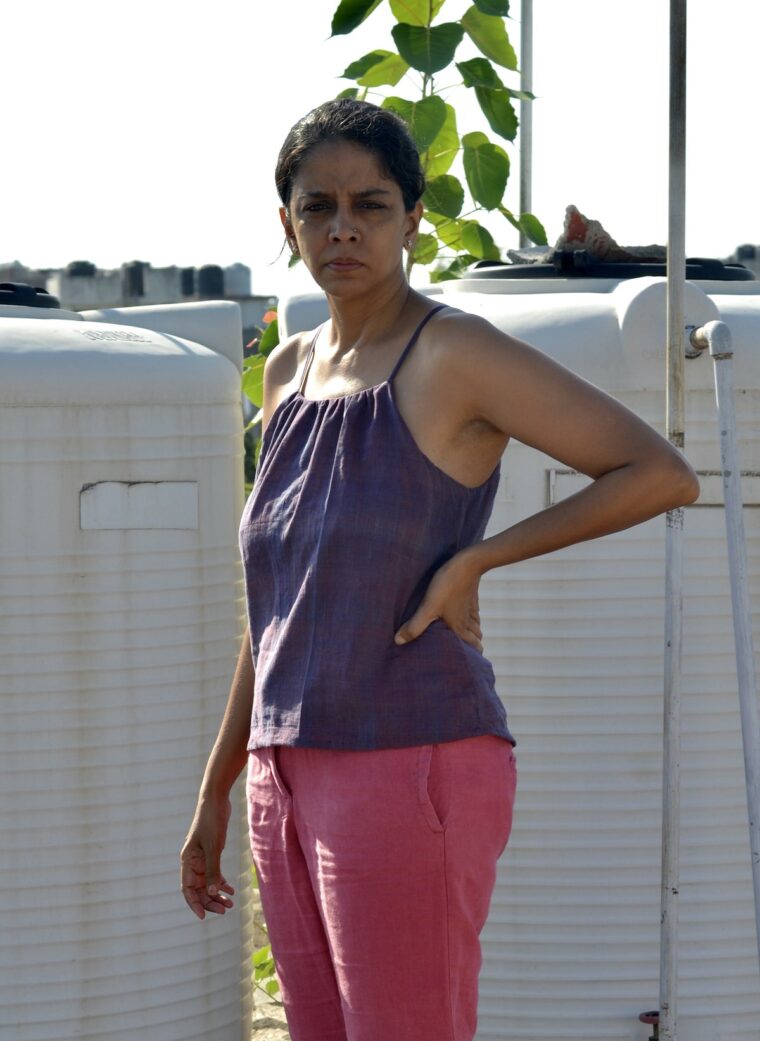 Here are the details of how I went about making my new Enmore top.
Based on the finished bust measurement, I made a muslin in size 4, cup size C (my measurements, in inches, are: HB33, B35, W30, H40, height 5’4”). Based on previous experiences, I already had lowered the bust dart by 1” for the muslin.

The main problem with the muslin was that it was snug around the hips (waist below). Also, having lowered the bust dart, there was not enough length to attach the elastic (for the bra). I also wanted the top to be a wee bit shorter. Most importantly, the armhole was too low for my comfort. I tried reducing the strap length, but that only made the neckline go higher, which I did not want. The solution seemed to be to raise the armhole instead.

Here is how I did it:
I wanted the armhole ½” higher than what it was but not the entire length of the armscye. Upon trying the muslin, I decided I wanted to raise it from where the two armhole notches are (on the back pattern piece) to the side seam. I drew the original seam allowance line, then drew a new one and let the old one join in gradually into the new one using a french curve ruler

In the photo below: blue shows the original SA, and yellow the new SA (raised armhole). The overlap of blue and yellow is where the SA remains the same. Since only the back pattern piece has armhole notches, I raised the front by measuring approximately the same distance from the side pattern piece. The result is that I have an armhole raised to a level where I am comfortable keeping the neckline at the same place as before. The final version has the following modifications made to it:
1. I used the size 4 pattern piece for the front and back graded out to a size 6 from the waist below, keeping the length for the size 4 pattern
2. Then I shortened this length by another 1”
3. Lowered the bust dart by 1”
4. Lengthened the shelf bra length by ½”
5. Raised the armhole by ½” The fabric I used is cotton jamdani (handspun cotton from West Bengal and Bangladesh). It is light and floaty with a beautiful drape.

And that’s it! I have a top of my dreams which is comfortable for summer, giving the exact amount of coverage I would like. I am so glad that I made it. If you, like me, are sitting on the fence, I urge you to make it too!