my favorite oliver + s pattern: stacy from at luce ends

Stacy from At Luce Ends is here today to talk about her favorite Oliver + S pattern. You might remember her from earlier this month when she contributed to the 2015 Photo Mosaics post. It’s great to have you back, Stacy!

Hello fellow Oliver + S lovers! I’m Stacy, and I’ve been asked to share my favorite pattern with you, so here it is. I had a hard time choosing, but finally settled on the Ice Cream Dress. I have made several of them in a range of sizes, both for my daughter and as gifts. I started sewing children’s clothing, with the Oliver + S Tea Party Sundress pattern, just a couple months before my daughter was born in 2010. I had been drawn to the paper doll illustrations on the front of the patterns, but was not sure if they were worth the price. I found the Tea Party Sundress on sale in a local shop and took the plunge. I had not sewn clothing since I was about ten years old, and was a little rusty on my non-quilt sewing. I quickly discovered Swedish tracing paper for pattern tracing, and the glossary of pattern terms and the directions within the pattern itself helped me find my skills again. This first little dress is special to me because I made it with some vintage Strawberry Shortcake fabric that my Grandmother, the first person I remember watching use a sewing machine, made a dress for me out of when I was small! 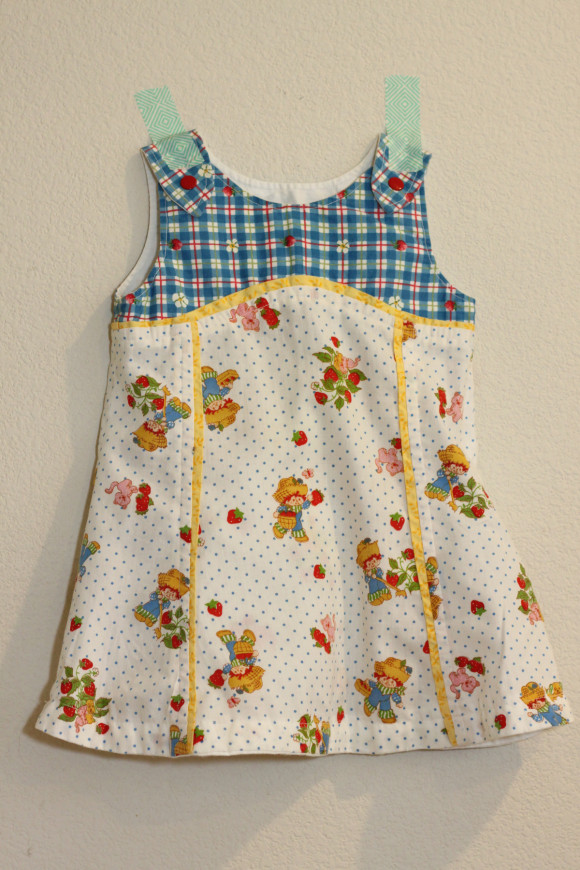 After making a couple Tea Party Sundresses (or jumpers, because it was winter), I realized that I did indeed like the patterns very much. Some of my next and frequently sewn acquisitions were the Family Reunion Dress and the Ice Cream Dress. I now own 40 paper Oliver + S patterns, and have sewn 32 of them! I owned the Ice Cream Dress pattern, but didn’t sew it for a while. I must have loved the others too much to try something new! After my initial sew through this dress, I made a second dress and two blouses with it in the next month. I remember being intimidated by the “v” in the pockets and neckline, but was amazed at how well they came out when I did exactly what the directions told me to do! I had seen a couple of these dresses floating around Pinterest that were sporting some piping between the yoke and dress/blouse section of fabric and knew I needed to try it on the blouses. Before I owned this pattern, I bought the border fabric for this dress when I was visiting my sister in Chicago. Then, I held onto it for about a year before I could convince myself to cut and use it! My favorite Ice Cream Dress to date is this one made in some bold Heather Bailey fabric with a cross stitched yoke. I remember reading an Oliver + S blog about removable waste canvas for stitching on clothing, and was intrigued. I had no idea it would be so much fun or that it would take more than the one afternoon I had allotted. Last summer I again used the pattern a couple times, both for my daughter and for gifts. I wanted to make a blouse out of a favorite green, but too small, top that had been mine. I knew I needed to use the fabric then or we would outgrow the amount of fabric left! I made it and we got a couple wears out of it before needing to pack it away. This green and dotted dress is the most recent time I sewed with this pattern. It got at least a weekly wear last summer, and is now also packed away. This summer is looking good for another Ice Cream Dress to make an appearance! Thanks so much Stacy!