Shelley is such a huge fan of the Little Things to Sew book that she hosted a Cover to Cover Challenge a couple of years ago. She’s here today to talk all about the Explorer Vest pattern that is found in the book. Take it away Shelley!

Have you sewn the Explorer Vest from the book Little Things to Sew? A question popped up recently in the Oliver + S Facebook group about how best to customize the vest for little explorers on the go.

Quickly, there was a flurry of comments about what to include and how to go about it. I thought I’d round up some of my long-remembered Explorer Vests as well as a few newer ones to share some inspiration.

One of the nicest ways to personalize a vest is by using patches. They can be iron on, or sew on, and may be patches particular to the kid’s area of interest, or even ones that have been hard earned and won by the little explorers themselves.

This lovely bug collector’s vest by Katybellabug uses a ladybug patch with delightful handstitching to show the bug’s trajectory across the pocket. A little piece of folded ribbon makes a cute tag inserted under the stitched edge of the pocket. Melissa used patches her boys had earned picking up litter. Inspired by their “Smokey’s Helper” badged vests the boys went on to pick up even more litter! When it came my turn to make a vest I was inspired by this next one from Marlene (“Nanamar” on Flickr). She has cleverly used a piece of printed fabric as a patch, keeping it on theme with the vest’s lining fabric. The addition of an elastic loop inserted under the pocket allows for attaching a removable mini torch. 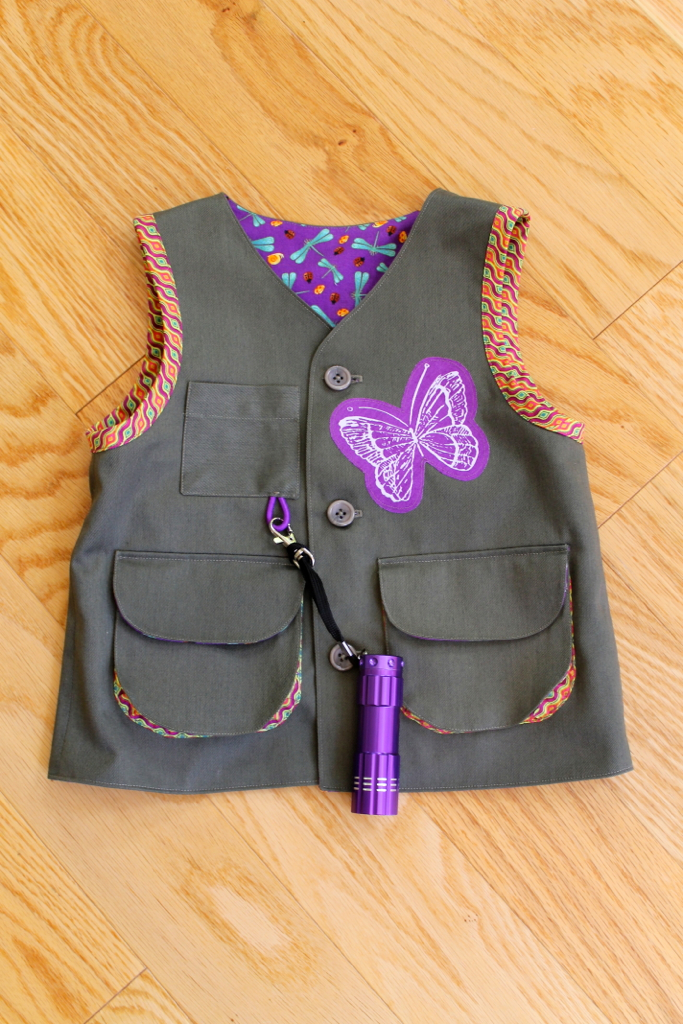 A great source of small sections of brightly colored cord elastic like this is elastic hair ties. Make sure you stitch through the braided threads that surround the elastic when you attach them and they stay put very nicely.

For the vest I made for my nephew, I sacrificed a lanyard to use the clips and the twill tape. At our house we seem to have an enormous tangled pile of lanyards from various zoo or gallery memberships as well as conferences we parents sometimes attend.

The plastic lanyard clip worked well for a small torch which can be removed when the vest gets washed. The longer twill tape was sewn inside the pocket and used to attach a compass. This way the compass won’t get lost but can be held level away from the body without needing to be detached.

Like others in the Facebook group I considered attaching a whistle. Now, we would all agree that a whistle is very useful to attract attention when you’re lost in the wilderness, but how many small children will wait for that moment before they blow it? The addition of a whistle would require careful consideration of the kid and how much you cherish your relationship with their parents. (I’m assuming no sewing parent would sanction one themselves!)

High visibility was another safety topic that came up in the Facebook discussion. Bright quilting cottons are perfect for making the Explorer Vest, but Lyndsey went one step further.

When her son wanted to be a garbage man for Community Helper Day, Lyndsey used fluoro fabric and reflective tape to make the perfect council worker vest. But what I especially love about this vest is her ingenious use of T-shirt Transfer Paper to make her own patches. She has designed some personalized patches then printed them onto transfer paper. The transfer is then heat fixed onto a base cloth (e.g., white cotton) and then attached just like a commercial patch.

When that vest was outgrown, she made another. And this time, Little Bear got a matching mini version – also with his own customized patches! Of course, a matching Little Things to Sew Reversible Bucket Hat makes the explorer’s outfit complete! Sharon did just that with this cute little Diego look a like. 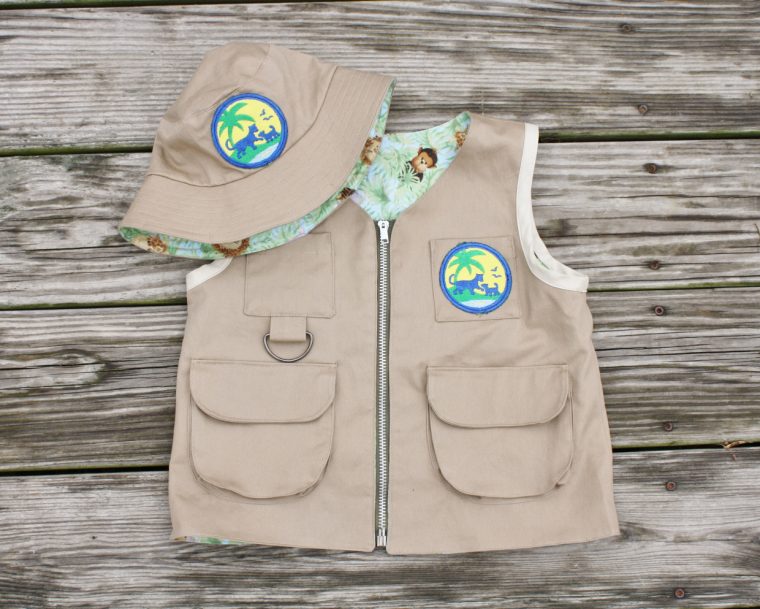 The other vest alteration that Sharon has made is to replace the overlapping button up front with a zipper. You could do this without altering the pattern pieces at all – just bear in mind it will end up considerably wider due to the front panels not overlapping. Another customization I love is here, where Karina has inserted grommets in the pocket flap to serve as hanging points for lures. Such a clever idea for a little fisherman’s vest! Finally, as I was starting to think about all these vests I had already seen, one work in progress popped up in my Instagram feed. With her son’s birthday looming, MC was sewing him a Nerf gun ammo vest complete with gun holder, fold over elastic bullet holders and larger elastic loops for ammo cartridges. She kindly snapped a few pictures before wrapping it up for his birthday. Here’s hoping he doesn’t wake up to read the Oliver + S blog with his morning milk before opening his presents. I’d hate to ruin the surprise!